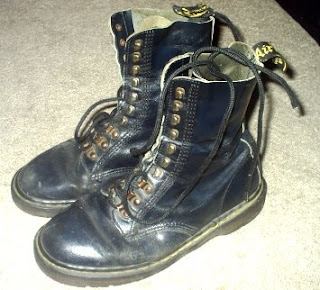 Half-awake self-Googling has unearthed something of which I have no memory whatsoever; a letter to The Independent (have I ever even read The Independent?) from 1994:

Your 'Tried and Tested' feature on workboots ('Boots made for working', Review, 6 March) purported to offer an objective comparison of various examples, combining stylistic and practical considerations as its criteria. It came as something of a surprise that the legendary Dr Marten's 1460 was nudged aside by a gruesome item calling itself the Caterpillar. But the real shock was that the main problem the panel found with the dearly beloved Doc was that they take a long time to wear in.

Do these people not understand? This is the whole point] The Doc is a design classic, but, at the same time, it is a cult icon. It is the footwear that Kevin and Tracy never considered, even when they were being seduced into Levi 501s, the only piece of clothing to rival the Doc's status. It is the footwear of tribes, of skinheads, of crusties, of mid-Eighties clubbers. It is the secret sign that casts post-modern irony upon one's regimented City suit, that symbolises the switchblade beneath Julian Clary's daffy finery. And, as with all tribes, the initiation ceremony binds us.

A new pair of Docs is not just a new pair of shoes: it is a pact. After the initial choices, we have the week or two of pain, of gritted teeth, of no dancing. When purchasing, forget polish or spare laces; go for a big box of Elastoplast. Compare notes with your Doccy chums. Does talc help? Thick woolly socks, perhaps? Maybe pummelling them by hand for half an hour every evening?

But, after suffering the paces through hellfire, a bond has been forged. Not just with your fellow fans/martyrs, but with the boots themselves. They are yours. They are now comfortable. They work. They walk. You wear them to the pub, to work, to your naff brother's wedding just to make a point. And, you will wear them, love them, long after the Caterpillar has demonstrated a lifespan not much more impressive that its larval namesake.

“Kevin and Tracy”, indeed. Today, I don’t even own a pair of Docs. A fortnight of “no dancing” has stretched to many, many years, and I can’t even blame my choice of bootage.
Posted by Tim F at 12:48 pm

You were right though - who walks around in caterpillars now?

Sorry - that wasn't the kind of response you were looking for, was it.

I remember saying to a friend at college that I was sad I wouldn't be able to wear my Docs when I was an old lady. He said YOU'LL ALWAYS BE ABLE TO WEAR THEM. ALWAYS!

We didn't think about the fact that I maybe wouldn't want to wear them one day.

I know, Annie. Like feeling the need to stay up for New Year's Eve. But as for self-googling, it's also thrown up the fact that I'm on the reading list at Florida State University (you may need to scroll down a wee bit).

No dancing! A severe deprivation. Was this a self-imposed penance?

Coool! I should've got it autographed whilst you were here...

Self-consciousness rather than self-imposition, Christopher. The sudden realisation that I was a white, heterosexual male, and as such was best advised to leave it to the experts.

I know, Annie. FSU’s endorsement has immediately added 43p to its value on eBay.