I love the smell of ink in the morning

Still with the black armband on, some thoughts from Frances Morgan, publisher of the lamented Plan B, via Everett’s blog. They go some way to explain why the mag will be missed, why I’m so proud to have had even a peripheral role in the whole Careless Talk/Loose Lips/Plan B ride, and maybe why I’m cooking up a neat little ulcer over the book I’m writing in a way I might not if it were *just* a website:

Quick question – any chance of the mag continuing in on-line form, a la Pfork, The Quietus or Good.is?

I just wanted to answer this question. For me, the answer is no. This is not to slight the sterling work of the above websites, because they’re great examples of how web publishing can work. However, I feel very committed to print as a medium. There are many reasons for this, a lot of which can be picked apart and thrown aside as luddite, fetishistic, elitist, or just plain old-fashioned, and you’re welcome to do so…but it’s a commitment that I can’t switch off just because making this particular print product is no longer viable.

It is not that I’m decrying the web for making “everyone a critic”. I don’t think the web has killed criticism, not at all. It’s not that I am bemoaning the loss of “authority” of the critic – fuck authority, it’s that which has kept music criticism entrenched in such narrow gender, race and class strictures for so long (and I’d argue, actually, that the web has done less than it should to change this, but the potential is there for sure). I like a plurality of voices, wherever it occurs, although I do think that plurality often results in a lack of space to think and consider and to reflect; it seems to have generated this need for a quick response, an instant appraisal or commentary.

One thing I like about print criticism is that there is an unavoidable temporal gap between writing and print. This may not suit everyone, but I think it suits me and it suits the music I am interested in, and actually it probably suits most music. I do sometimes wonder if there is more of a connection between the music that gets reviewed and the style of reviewing than we actually acknowledge. Bit of unformulated thought, that, but I’d like to ponder it a little.

Although it might not always seem like it, we do edit things at Plan B. If you’ve written something for us, it will go through a few hands and past a few pairs of eyes before it appears on the page. If there’s time, we ask for rewrites and clarification. I like to have a little shout at everyone about punctuation. We have to stick to certain word lengths. I’m not saying web editors don’t do this too, but often more content is required at a greater speed. Put simply, it’s just different, and while I’d certainly work for online publications as a freelance writer, there’s no way I’d have busted my ass for five years on a very, very low wage to set up and maintain a web magazine. That’s not to say one shouldn’t, or that others at Plan B won’t. But it’s not for me. It never has been.

The other big factor is the visual side of Plan B, which is so important to us. The web – and again, this is my opinion – is not the right place for all those amazing photos and illustrations and layouts that go into making up an issue of Plan B. They belong on paper, decent paper at that.

As far as I remember, I only met Frances once, at Everett’s house in Brighton, where we were exerting the sort of care and attention she discussed on one of the middle issues of Careless Talk. Well, she was exerting care, I think I mostly made the tea. We got the train back to London together, and instead of talking about music in particular, we discussed the intersection of genius and lunacy, with particular reference to Louis Wain: 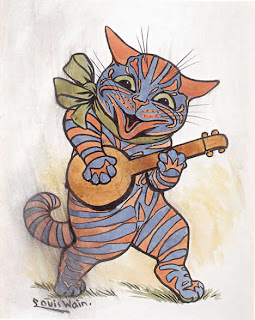 And, slouching towards relevance, a line by Thomas Mann, lifted from an interview with Clive James in today’s Guardian:

A writer is someone for whom writing is harder than it is for other people.

Oh good, maybe that means I’ve been getting better lately.
Posted by Tim F at 7:16 am

I get a kind of cerebral eczema and a temper to match when I'm trying to squarebash ideas into close order, but I wouldn't call myself a writer. An author, maybe, but only fleetingly.

Look, I'd just about convinced myself that the whole no-more-Plan B thing was a wheeze cooked up by Everett to test out his Web 2.0 / music criticism / theorists theories, there's no need to go and reiterate that it isn't.

That is a jolly nice drawing of a cat.

The cat's banjo has no strings. Madness is obviously on the cards.

Interesting point, Christopher: although some might argue that being an author (with the implication) of publication is better than being a writer (which is just someone who, y'know, writes). And "cerebral eczema" will be borrowed in due course.

Sorry Chris. It'll help when you see the corpse, I'm sure.

Billy: if the banjo had strings, the cat would have to disembowel itself.