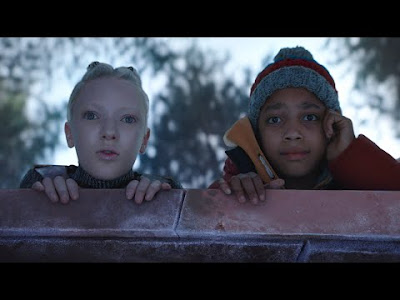 John Lewis has been criticised for the music used in its Christmas advert; not because it’s a lame, wimpy arrangement of a fondly remembered song (that goes without saying, sadly), but because it’s a lame, wimpy arrangement of a fondly remembered song that someone else had already done. Apparently a folk duo called the Portraits released something mighty similar as a charity single last Christmas.
Let’s be clear here. The Portraits didn’t write the song, ‘Together In Electric Dreams’; it was penned by Phil Oakey and Giorgio Moroder in 1984. Their claim is that they arranged and performed it in a particular way, and the people behind the commercial copied that. Now, I still maintain that you can’t copyright or plagiarise an arrangement, notwithstanding the imbecilic court ruling that the 2013 hit ‘Blurred Lines’ had copied Marvin Gaye’s ‘Got To Give It Up’, despite having no obvious connection in terms of melody, harmony, rhythm or lyrics. What happens instead is that as particular styles of music become popular, they bring with them particular tropes of arrangement or instrumentation or production (quiet verse/loud chorus, fretless bass, Auto-Tune, etc) and for a few months or years, it sounds as if everybody’s doing it, even if the songs themselves are different.
Which is presumably why the Portraits offered up a lame, wimpy arrangement of a fondly remembered song – because they’d heard similar things done on John Lewis adverts. If it does get to the stage when arrangements can be the subject of a plagiarism claim – and I really hope it doesn’t – it could even be argued that it’s the Portraits who have absorbed the lessons of John Lewis Past, replicating the insipid abuse inflicted on the Smiths, Randy Crawford, REO Speedwagon and more and ruining the Oakey/Moroder song.
Anyway, here’s a recording that may be many things, but it’s far from lame and not the slightest bit wimpy. Take it away, Philip. And buy yourself a sofa when you’re done.
Posted by Tim F at 7:45 am