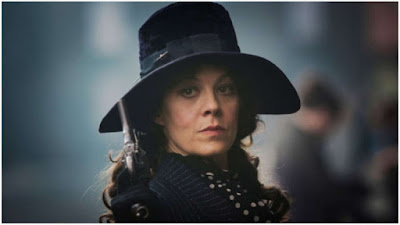 Given that it is a bit irrational to mourn the death of someone you never knew, I was still sadder to hear of the passing of the actor Helen McCrory than of the Duke of Edinburgh a week before. Mainly because McCrory was little more than half the Duke’s age and left two children under 16, but also because she was a fabulous, compelling performer. And on the occasions when she wasn’t inhabiting another character, she appeared to be a wise, perceptive woman; here she is talking to The Chap in 2019.

I don’t think I’ve ever been interested in any play about the happy, successful, lighter moments of life. I think that’s a very modern, pervasive idea in our entertainment, whether it’s on Instagram or in fiction, to show only the good and the perfect side of yourself. It’s just a lie and it’s very dull, and it’s nothing that anyone should even strive for. Obviously when you’re younger, all the dark side of life holds a lot of interest. Every teenager listens to the Doors and reads Sartre.