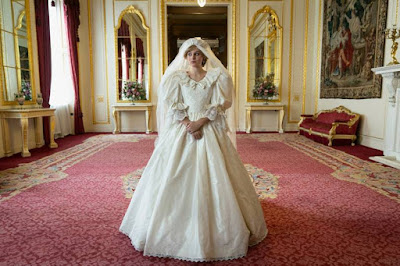 The Crown has been one of the most successful TV products of recent years, and it’s not difficult to see why. It’s the story of the most famous family in the world, whose loves, losses and fashion choices are hung upon with a devotion that must have even the Kardashians seething with envy.
But, according to some – including Oliver Dowden, the Culture Secretary – fans of the show need to be reminded that The Crown is not a scrupulously accurate documentary and some of the stuff has been, you know, made up. Aside from the fact that this could apply to pretty much any nominally historical drama, it rather misses the point of how the British monarchy works its spell.
In his 1867 text The English Constitution, Walter Bagehot identifies the success of the political system as a seamless meshing between the mundane efficiencies of good governance and a more ethereal, ornate institution, the presence of which is to entrance those who are to be governed, and a good many onlookers as well:

In fact, the mass of the English people yield a deference rather to something else than to their rulers. They defer to what we may call the theatrical show of society. A certain state passes before them; a certain pomp of great men; a certain spectacle of beautiful women; a wonderful scene of wealth and enjoyment is displayed, and they are coerced by it. Their imagination is bowed down; they feel they are not equal to the life which is revealed to them.

Bagehot argued that for this part of the system to work, an air of mystery must be maintained: “We must not let daylight in upon magic.” Obviously the modern Royals have had to tolerate a level of intrusion that Victoria would never have countenanced, but there is still a sense that they are somehow beyond the mundane realities that afflict our tiny lives. Of course, only a minority, the sort of diehard monarchists who camp out for three days to catch a glimpse of a passing coach, accept this as an empirical fact; and another minority reject the whole institution altogether. There’s a third section, though – larger than the other two combined, I reckon — that knows what’s on offer is a “theatrical show” — but is prepared to go along for the ride, just as they go along with soap operas and structured reality TV. They know what they are being presented with isn’t the full-blown meat-and-mucus reality, that these are people performing a role, acting out a script, but they’ll suspend disbelief because, well, life feels a bit nicer if they do. Few adults believe in Father Christmas either, as a literal entity, but they believe in the power of the story and woe betide if you ruin that magic with nasty, Grinchy, Scroogey daylight.
Dowden’s complaint, surely, is not that The Crown is fiction; it is that it’s the wrong, unofficial, unsanctioned fiction, a type of theatrical show to which we are less likely to defer. One that succeeds as art but fails as politics. Or at least the type of politics that he wants to prevail.
PS: I was on LBC just now, reiterating the above in a more garbled manner.
Posted by Tim F at 9:55 pm

I watched the previous seasons of The Crown, but found it impossible to watch this season. I really was looking forward to this season, too, mainly because we lived through it or rather watched it since I am in the US. xo

Hi Tim, I thought I heard you on the show. Agree totally with your point. James was quite kind to you as well given how he tears up some on the callers and tangles them in their own words. Hope all is well. Ian