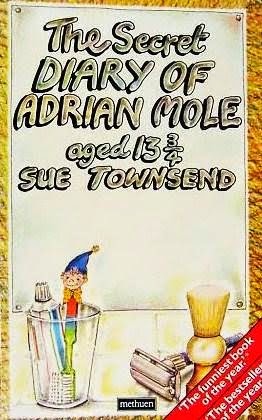 I first met Adrian Mole in 1982, when he was still called Nigel. His diaries formed the basis of a Radio 4 series, to which my father and I listened during a rather rainy camping trip, somewhere in the north of England (I think Yorkshire, but he will probably correct me). Before Nigel got to print, thus making his creator Sue Townsend one of the most successful British authors of the decade, someone pointed out that his name was too close to that of Nigel Molesworth, anti-hero of an earlier series of books, and so he swapped with his best friend Adrian. Dad and I had spotted this immediately: he’d been a fan of Molesworth as a child and passed the enthusiasm on to me. And we both adored this new hero, at once self-obsessed and utterly lacking in self-awareness, pretentious and gauche, annoying and vulnerable, utterly of his time and place but also universal. I don’t even know the name of the actor who voiced Nigel/Adrian’s thoughts in those broadcasts but his deadpan delivery, battling with the swoops and croaks of a breaking voice is the one that comes to mind whenever I read Townsend’s words. I later read an interview with her in which she said that the brilliance of his performance was down to the fact that didn’t really understand that what he was reading was funny – also the secret behind Peter Jones’s work as The Book in another of my comic touchstones at the time, The Hitch-Hiker’s Guide to the Galaxy.

I’m pretty close to Adrian’s age (one year, one month and five days younger, to be precise) so it was a given that I’d identify with him; and yes, I had my share of Pandoras and wanted to be an intellectual and wrote some bloody awful poetry as well. I wasn’t so sure why my dad liked him as well, seeing as he was so much older. And it was only when I heard of Townsend’s death this week and recalled listening to the diaries as rain hammered on the roof of the car that I realised that in 1982 he was a good few years younger than I am now. Maybe I should write a poem about it.

I've just got over the Savilegate business and now this. Things have come to a pretty pass when you can't even rely on a f*cking post code.