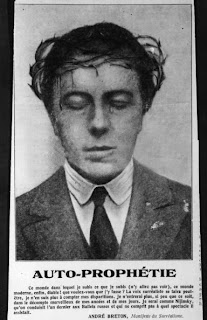 One of the more delectably useless features of LibraryThing is the author gallery function, which arrays portraits of the people who wrote the books in your library, in alphabetical order. This can throw up a few rather startling lookalikes – as distinct from lookunalikes – adjacent to each other. Who’da thunk that Anthony Beevor and Frédéric Beigbeder would be so similar; or Malcolm Bradbury and André Breton; Ian McEwan and Roger McGough? The only problem is that now I don’t want to split up these unlikely twins, which means I’ll probably never sample from the wells of Aphra Behn, Wallace Breem or Leslie McFarlane. Sorry.
Posted by Tim Footman at 8:04 am

Email ThisBlogThis!Share to TwitterShare to FacebookShare to Pinterest
Labels: books

What a lovely photo of you. Which one is the cat?

A post-mortem picture if I'm not mistaken...