And she had to unlearn the trumpet as well 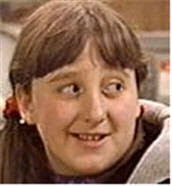 I was going to say something about Dan Rebellato’s magnificent evisceration of the Daily Mail’s half-witted theatre critic Quentin Letts, but there really is nothing I can add: just read the bloody thing. Similarly, I’m not sure what needs to be said regarding the story, reported in The Sun so it must be true, of the Dorset woman who has spent 12,000 of your Earth pounds in her efforts not to look like someone who used to be in EastEnders. One does wonder if there’s a market for a lookunalike agency, which will hire out people who don’t look like George Clooney or Fiona Bruce or my favourite Holy Roman Emperor, Charles the Bald, so they can hover at your party or corporate event, revelling in their antidoppelganger status. Over to you; who would you most like not to resemble?
Posted by Tim Footman at 9:50 am

I look nothing like that chap I sat opposite on the Waterloo to Alton train some time in 2004.
I am pleased to say that it cost me nothing to achieve that effect.

I was thinking the Spilled Ink attack on Quentin Letts was a bit overwrought... until I reached the bit about lobbying sponsors to withdraw backing for the play. Though it seems the case is not necessarily proven - and fair play to Spilled Ink for including the correction/clarification.

The killing of Banquo's children bit though - yeah yeah - so Letts isn't perfect. And that's speaking as Macduff's murdered eldest.

The other woman? Perhaps a mirror could clarify things or a haircut correct them. Cheaper than plastic surgery.

She's got 5 kids, only her husband works, how can she afford 12 grand on surgery? Sheesh.

I don't think the Daily Mail is even right wing, I just think it's deeply weird. It doesn't seem to have any kind of coherent agenda. It just hates everyone equally. (eg the 'You're too fat! You're too thin!' angle on women.)

Who said anything about surgery? The Sonia-alike spends a modest amount on clothes, haircuts & make-up, The Scum tots it up over 10 years, and bingo - complete non-story.


"I spend about £40 on my hair every six weeks, around £50 a month on clothes and £30 a month on make-up but no matter what I try people still think I look like her."

Except that you had to go to Alton, Vicus.

I do get the feeling that QL had never even heard of Saved, BWT. Which is a bit like a music critic never having heard of the Sex Pistols.

You're right it's weird, Annie. Even Jeremy Clarkson thinks so. But as StiffPigeon points out, no scalpels were wielded in the creation of this non-story.