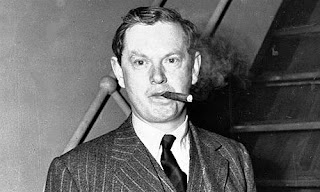 Undoubtedly a twat of the highest order. Have you read "Fathers and Sons" by Alexander Waugh. Sheds some light on the psych.

Elvis Costello, drunk and trying to goad a bunch of West Coast American musos he had no respect for, once called Ray Charles as an 'ignorant, blind nigger'.

I'm not for one moment suggesting that his and Waugh's comments aren't deeply offensive in themselves. But surely to suggest that either set of comments in some way diminish the respective bodies of work of artists who otherwise contribute signicantly to our understanding of life and art, is foolish in the extreme. T.S. Eliot may have made many deeply anti-semitic remarks but the 'Four Quartets' contains some of the most elevatingly beautiful ruminations on the nature of humanity...Go, as they say, figure.

I think if we held all artists lives to the same scrupulous set of judgements to which we subject their art, we'd pretty soon run out of poeople worthy of being read, viewed or listened to.

OK he was deeply flawed. Perhaps he should have been deeply floored.

"It has lately been demonstrated that cinema audiences do not know whether the films they see are spoken in Italian or English. It is useless to write down to their level. Try to produce a work of art."

It's true, I didn't bother with the subtitles when watching 8 1/2.

This raises so many questions about the work of an artist in relation to his character - and we've been here before - and in Waugh's case the nearest of the plateload of fortune cookies asks whether Waugh would have been an even more difficult person if he hadn't had his faith to sustain him?

The next asks why 'Loot' Padfield is the only reasonably decent American in the Waugh canon?

Further confirmation that posession of great talent in no way pre-empts the ability to be a prize arsehole.
Christoher: Re Waugh's faith sustaining him, I suspect there's a case to be made out that the particular brand of Catholicism embraced by Waugh was another facet of his overwhelming snobbishness.

I read Scoop recently. It's an extremely funny, biting satire of journalism, but to readers in the 21st century some of the language is deeply offensive. But I suppose if you want to read things from different eras you have to take the rough with the smooth, and I think you can enjoy it without endorsing the sentiment.

As 'Attila the Stockbroker' once wrote:

Auberon Waugh
Is a terrible bore,
But I'd much rather
Have him than his father

In spite of everything I know about Waugh, I still love his novels, particularly 'A Handful of Dust'.

Selina Hastings' account of Waugh's childhood gives a fascinating insight into the possible origins of his misanthropy. I shall have to read Alexander Waugh's well-reviewed book.

Ian (Please excuse us, Tim): Yes. Despite wanting to discover and believe the best in people, it's hard to gainsay Waugh's Catholicism as much more than a vehicle for a supposed social exclusivity. It's curious that none of the many proponents and advocates of his brand of Rome in his novels are priests - indeed, from Fr Rothschild in Vile Bodies to Canon Membling in Brideshead his priests are invariably caricatures. Or are there exceptions that I haven't picked up? And - more curious still - are any of his priests ever seen out-of-doors? There are deep waters here.

Waugh would possibly have been a different man if he had been the older brother and had felt he had less to prove.

Everytime I have to say "no" when I don't want to, I automatically say, "Up to a point." It has stuck with since my first reading of Scoop through incredibly teary eyes, in that onion factory during lunch-breaks, all those years ago.

One day, calling someone "an utter bastard" will be frowned upon, just as racism and cultural snobbery out of their contemporary context are now.

All I can really add is to note that a post on Waugh attracts 10 comments, while a post on John Hughes attracts none. I think that says something about the sort of clientele I attract.

We're treading on eggshells all the time now. Even free speech is relative. Waugh basically didn't give a toss.