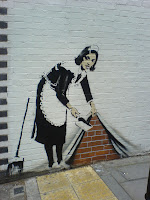 I think it was Marcel Duchamp (and if it wasn’t, it was surely someone who was thinking along the same lines as Duchamp, or at least someone who had Duchamp’s postcards on the wall) who came up with the two best justifications of conceptual art as A*R*T per se. One was “It’s art because I call it art.” And the other was “It's art because it’s in a gallery.”

This is why I was always a little resistant to the charms of the Young British Artists; it wasn’t that their stuff was bad as such; it was just that Marcel had done most of it before. The only aspect over and above Duchamp that the Sensation generation offered (Did I ever tell you I was at the preview? The wine was frightful, darlings!) was a very 90s focus on celebrity and money; which Warhol had done anyway, 30 years previously.

It couldn’t last of course. He had to go into galleries, because that’s what artists do, and the celebrity and the money may have had a part in it as well. Oh well. But there’s something a little desperate about the hype surrounding his current show at the Bristol City Museum; the whole preposterous story that the council wasn’t told about it until the eve of the opening is just silly. The show would have been a huge success anyway; this smacks not of Duchamp, but of that old fraud Dali. 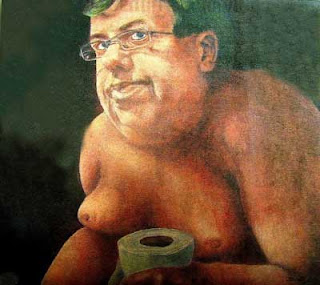 The thing is, Banksy’s been out-Banksy-ed. Conor Casby, the artist who put unauthorised, unflattering portraits of the Irish prime minister into two Dublin art galleries, Just Did It, which is surely closer to the graffitist model that propelled Mr Gunningham to fame. And closer to Duchamp as well, and the questions he raised: it’s art because it’s in an art gallery; but should it be?
Posted by Tim F at 6:39 am

Very interesting thoughts. I am hoping against hope that the extreme hype possibly indicates Banksy is attempting to subvert the paradigm from within.

I have heard important international collectors were alerted to the exhibition weeks ago and were there for the opening - I don't know how true this is.

Charitably, he has chosen to put Bristol on the artistic map, having refused to take part in Tate Modern's street art show last year (because it was a group show, one wonders now, less charitably?)

Banksy did do that too - he put up some pictures in the Tate I think, and the Museum of Modern Art in New York, which weren't noticed for a couple of weeks.

I'm a big fan. The whole thing is curious though - there's a whole shop in Spitalfields market which sells pictures of his graffitti on canvas, from which he doesn't make a penny, not to mention numerous street stalls in markets all over the place which sell his images on t-shirts and posters - no other live artist has ever had to live with this situation. It's unprecedented. I wonder how he feels about it...

You've got it, Tim. Banksy IS the new Dali.

I do like some of his stuff, but there's street art I prefer.

When in Bristol, don't hang around trying to take a picture of his naked-man-hanging-out-of-window picture, get down Stokes Croft where there's loads of really good murals and the like.

I wrote something about street art on my other blog that surmises my feelings.

Is Banksy in the Tate? Has there been a Banksy documentary film yet? That would only leave TV interviews and a knighthood.

I'm not so sure that he is Gunningham, and as long as he keeps his identity secret he has a great thing going, even now that he's started to work within the system.(No way he surprised the museum!)

While it's kind of selling out, it's hard to begrudge him a way to make a living from his work.

I'm a fan too. And I've got no problem with Banksy making a few quid from his fame, or with him putting his stuff in a museum. What I don't like is the entirely spurious guerrilla myth about setting up the show under the council radar.

If you're an outsider artist who achieves success, you've got a number of choices: you can stay outside; you can go inside; you can do some outside things, and some inside things. What you cannot do is to go inside, but pretend that you're actually still outside. Anyone seen pictures of Mick Jagger at the Grosvenor Square demo?

Got to hand it to Banksy. He even subverts subversion.