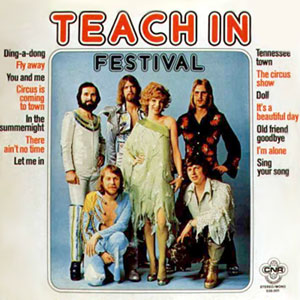 Exile brings a few consolations: I managed to miss last weekend's attempt to re-stage the Treaty of Versailles, and so I have yet to see or hear the Serbian lesbian torch song that managed to pluck everyone's votestrings (except Malta's). I can't even comment on whether Sir Terence's liver was under more intensive strafing this year than last. But Small Boo came up with a gem of an idea that might help to transcend all the petty factionalism and block-voting that has marred recent Eurovisions. Each country is allowed to pick one song that has previously been entered in the competition, and enter an all-time Eurovision Playoff. Since the event's been going since 1956, some of the original performers may be unable to come up with the goods, so a substitute is permitted, but it must be a passport-holder for the relevant nation. (None of this Celine-Dion-pretending-to-be-Swiss malarkey.)

For example, one presumes that the good people of Sweden would choose 'Waterloo' to be their entry, unless a massive, collective brainfart gives the honour to 'Diggi-Loo, Diggi-Ley'. But, as any fule kno, Abba will be unavailable, since Agnetha (the one we all fancied back in 1974, before dismissing her as being too blonde and obvious, compared to dark, mysterious Frida, but then, a few years ago, we realised, nah, it was Agnetha's bum that did it for us all the time) is a recluse who refuses to come out to play, even for all the peroxide in Gothenburg. So maybe the honour should go to The Hives, or Peter, Bjorn and Jon, or her off of the Cardigans.

But of course, this presupposes that the best songs get entered for Eurovision. Which is, of course, piffle. I can only think of three entries that might possibly represent the best of their respective nation's art: 'Volare' (Italy, 1958); 'L'amour est bleu' (Luxembourg, 1967); 'My Star' (Latvia, 2000). Significantly, none of them won.

So let's tweak the concept. Each country is allowed to enter one song that has been written since 1956, whether or not it's been a Eurovision entry. And this is where my knowledge of Euromusic starts to fall down, and where I need your help, people. If you know a heart-wrenching Cypriot ballad or a slamming slab of Hungarian techno that encapsulates all that's best in its country's musical tradition, let's hear about it. Or even something really cheesy you once heard on holiday. In the meantime, here are a few to get you thinking.

Austria: What else but 'Rock Me Amadeus'?

Germany: Can, Kraftwerk and Rammstein offer some choice morsels, but it's got to be 'Da Da Da'.

Iceland: 'Ammæli' (aka 'Birthday') by the Sugarcubes, the best thing Björk's ever done.

Ireland: presuming we're restricting consideration to the Republic, which raises a whole number of questions, as well as excluding Van Morrison and the Undertones, I'd plump for 'The Boys Are Back in Town'. U2 and the Corrs can do the catering.

Sweden: 'The Winner Takes It All'.

UK: Time for Morrissey to come up with the goods, I feel. 'Everyday Is Like Sunday', maybe?

Any suggested amendments/additions?
Posted by Tim F at 8:51 am

Ooh, 'Playground Love' by Air, the only decent song in the entire history of pop music to feature a saxophone. Douze points to the French.

I'd have gone for 'Ça Plane Pour Moi' for the Belgian entry. I love that song.

The Sun Always Shines On TV????

It's gotta be Royksopp for Norway - Eple.

Or do they have to have lyrics?

And can My Bloody Valentine represent Ireland, please?

My Norwegian nomination would be 'My Delusions' by Ampop. Lovely little piano popstrels that they are.

Most of the continental European music I like is gauzy electronica, so probably wouldn't fare too well among the power ballads and soft rock of Eurovision. Not that I've actually watched Eurovision for years.

Erm...although it turns out that Ampop are from Iceland. Bugger.

Sorry, I am commenting way too much. I'll go now.

Lots of competition for the Scandinavian slots there. Does anyone know anything about Eastern European stuff? The only bands from there that I've really liked, Plastic People of the Universe (Czech) and Laibach (Slovenian) were at their best with cover versions, so would be ineligible.

And I'm wondering who would be best to perform one of MBV's shimmery dirges. Ronan Keating?

The Dutch should have something by Shocking Blue. Actually, no, they're rubbish.

Denmark, why not something by Savage Rose???

God Tim, I wouldn't have had you down as a wild-eyed, paranoid, bowler-hatted, royalty-worshipping, sash-wearing unionist. Tch, you think you know someone...

Laibach is the *only* Eastern European band I know. For a minute I thought Devotchka might have been from the Ukraine or somewhere, but it turns out they're from Denver, while Gogol Bordello are from New York, and the Russian Futurists are from Toronto. Arse.

It is, isn't it, Murph? And the fact that nobody explicitly mentions it on the night only adds to the charm.

Lovely to have you back, Spin. Do NI acts tend to represent Ireland in the Eurovision, like the rugby? None spring to mind. Clodagh Rodgers (who was from Ballymena if I recall) represented the UK. So I'm just following precedent. And you've got to be nice to that big bigoted bollix in a bowler, Dr Paisley. He's yer guv'nor now. ULSTER SAYS BOOM-BANG-A-BANG!!!

Patroclus: And then there was that Wedding Present spin-off band, the Ukrainians. From Leeds, essentially.

Were he still alive, definitely Serge Gainsbourg to represent France - he'd turn up pissed and disgrace himself.
And one of the versions of Amon Duhl to represent the Bosch - a twenty minute heavy psychedelic jam, just to ruin it for everyone.

Hmm, I posted a comment here yesterday which just ... disappeared.

Gigliola Cinquetti's Si to represent Italy. It was a Eurovision entry, actually, but was runner up to Abba's Waterloo.

Has to be Serge Gainsbourg representing France.

Re: Eastern Europe. My dad used to have loads of tapes of woeful Yugoslav singers wailing about drinking to forget some bint who had done the dirty on them, while accompanied by an accordian player. Sorry I can't be more helpful.

Maybe AD could provide the interval entertainment. Or a Krautrock supergroup, with them, Can and Neu!

I'm up for Shocking Blue to carry the hopes of the Cloggies.

Didn't Gainsbourg actually win the ESC as a writer in the 1960s?

To add my voice to the abandoned wee Northerners - re your border restrictions. So we had Dana, born Islington apparently, grew up in Derry (north side of the line), twice competed to represent Ireland, 2nd time won that and won the european competition. later came third in presidential race (scarey)- went on to represent Connacht-Ulster (I think) as an MEP. So all in all, your restriction would have saved the world from All Kinds of Everything - possibly a good thing. (Though, if I search in my heart, i suppose it's OK really, despite her politics.)
And - you'd be keeping out our current and previous Mary (presidents).
And - you'd be preventing me from nominating Watercress and "Candlemaker" for a laugh. Or Christy Moore and whoever is about to do "Lisdoonvarna" for its obscure references.
For spain - you can have Celtas Cortos with "Cuentame un Cuento" or "El Pelotazo".
Oops is that the time. bye for now.
(PS - Blimey - Dana - English - she kept that quiet.)

yes - that was the incompetent yokel again (above)

Without wanting to provoke any fisticuffs (although I do wonder whether any sash-wearing Prods read this, and if not, why not?) I was simply working on the basis that NI is still part of the UK. Whether it should be or not is another matter, but it is.

But after that revelation about Dana being a Brit, and since I've now discovered that ol' Serge won the Eurovision (for writing 'Poupée de cire, poupée de son') for Luxembourg, despite being French, I'll throw the Irish gig open to anyone.

Or is it Latvia?

Doesn't really matter, since they all vote for each other.

(But for the record, I believe he's Estonian.)

And yes, Spinny's return made me tingle in locations I'd forgotten I had.

...and it was France Gall who sang the Gainsbourg song and, as her first name suggests, she is very much not Luxembourgeoise.

For Ukraine, it has to be Green Grey singing a song called, 'Maze (pronounced muzzer) Facka,' which, yes, is their attempt at saying mother-fucker. I've entertained many a guest with that one.

Russia could have one of Alla Pugacheva's better songs. (They've already had her doing one awful one.)

And a nice bit of Nana or Demis for Greece.

http://youtube.com/watch?v=4jHiAN7aDiA
Perhaps it's not as good as Verka Serduchka after all...

Thanks, Bib (although I still can't access YouTube, thanks to the Thai government's far-sighted and benevolent attitude to internet freedom).

Excuse my lateness. Slovenia's 'Energy' (Nuša Derenda, 2001) has (FACT!) the best key change in all of pop music. And I don't say that lightly.

I've been listening to Teach-In's 'Ding-a-Dong' quite a lot lately. Feel-good-factor music at its best! I'd say, though, that the Abba blonde is probably the best thing ever to come out of Eurovision.