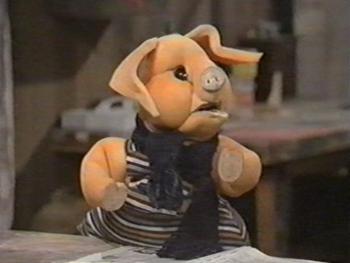 Happy New (Chinese) Year to the lot of you, especially the Pigs. Firecrackers are going off all over Bangkok, and subtle, usually unspoken racial jealousies become just that teeny bit more piquant, as all the people of Chinese descent don celebratory red t-shirts, just to remind us about who really owns the vast majority of Thai businesses. This weekend's celebrations should of course be distinguished from the wet t-shirt contest that is Thai New Year, or Songkran; and the Western New Year, which was most recently marked by a still unexplained bombing campaign.

Globally, however, the Chinese version is the most significant, because the Chinese will probably be running the world by about 2050. In fact, the current proprietors seem increasingly eager to end their lease at the earliest opportunity. To commemorate the dying days of the American Hegemony (b. 1989), I offer you this, the best YouTube video for a song based on the 2003 State of the Union address that I've seen all week. Thanks to Shane Richmond for pointing it out.

"...the Chinese will probably be running the world by about 2050. In fact, the current proprietors seem increasingly eager to end their lease at the earliest opportunity."

Blonk of the week.

Surreal Video! Did I notice masonic symbolism in the middle?

I agree.. the date is probably much earlier. Your perspective from there is always interesting.

Not paying attention, it took me awhile to link all the pigs everywhere to the Chinese New year...Even in NYC...

I'm waxing nostalgic for the carefree Asian New Years I spent in Taiwan and Hong Kong in the mideighties (sigh).
Small children setting off firecrackers everywhere made the motorcycle driving pretty dangerous, but nowhere near as dangerous as Bush.

Pipkins! I've come over all emotional. Would I be wrong in thinking that Pig had a brummie accent?

Annie R: I'd like to thank my mom, my agent and my gastroenterologist.

Pie: Don't the pigs in NYC just do what Rudy tells them to do?

Miss Peel: Driving a motorcycle in HK must be pretty dangerous anyway, surely?

And yes, Annie, Pig was a Brummie, Topov was from Sarf London, and Hartley was actually Kenneth Williams. But what could be more political than Pipkins?

Frightening and great vid. Love the horseheads on the oil pumps. When I was a kid and oil pumps were replacing orange groves all along the highways of Southern California, with the grave desire of children to make everything in their environment benign and approachable, I called them 'oil horsies'.

Pax Americana ... don't we all love it? If the Democrats have any sense they'll just use the video as their election broadcast in, what is it, two years from now.

Valerie: I think of those ornamental dipping birds that were a fixture in aspirational C2D households in about 1976.

Anthony: Got an article touching on the Democrats' slightly cynical attitude to Iraq coming up on Comment is free, today or maybe tomorrow. The Obama backlash starts here.

Like peel i am missing asia at new year but roll on cherry blossom in Japan. I will be there with bells on. Great blog, didn't realise you were in Thai. How is Pad Pong these days?

Hello Flirty, she of the shouldershoes. PP's gone all dull and touristy. Soi Cowboy's where the action is, or so I'm told.

I shall add that to my travel directory. Although still getting therapy after seeing the banana peeling. Shoes are currently "resting".