This last week, I did a few things I should have done before. I watched Dominik Moll's excellent Lemming, which is about infidelity, suicide, flying webcams, the nature of reality and, above all, plumbing. I listened properly to Stephin Merritt's Showtunes album, which is fey and funny and prickly and good. And I read JG Ballard's Crash. 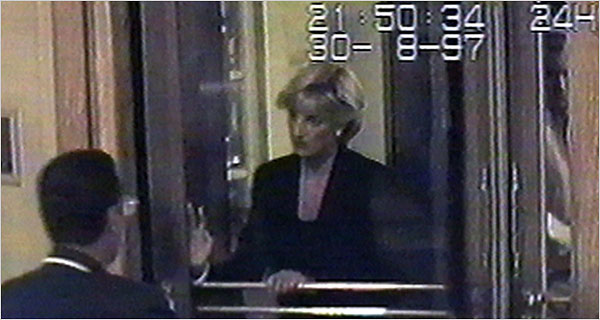 The last one had been the most serious omission, not just because it's older than the others (first published in 1973) but because I referred to it in some depth when discussing 'Airbag', the opening track of OK Computer, in my forthcoming book. (Sorry, but I haven't mentioned it for a few hours.) The sexual/spiritual rush that Thom Yorke's narrator seems to achieve from near-annihilation on the road is prefigured by Ballard's deadpan prose. Many people have also remarked on the extent to which Ballard seemed to foresee the extent to which Princess Diana's fatal crash became a media event, riddled with psychosexual potential, even as she lay dying. Try this:

"A middle-aged cashier at the airport duty-free liquor store, she sat unsteadily in the crushed compartment, fragments of the tinted windshield set in her forehead like jewels. As a police car approached, its emergency beacon pulsing along the overhead motorway, Vaughan ran back for his camera and flash equipment. Taking off my tie, I searched helplessly for the woman's wounds. She stared at me without speaking, and lay on her side across the seat. I watched the blood irrigate her white blouse. When Vaughan had taken the last of his pictures he knelt down inside the car and held her face carefully in his hands, whispering into her ear. Together we helped to lift her on to the ambulance trolley."

It's as if the various stages in the narrative arc of Diana's life are scripted by different writers: Barbara Cartland for the introduction and development; Jackie Collins for the crisis and its immediate fallout; and a bizarre switch to Ballard for a highly unlikely (but, in retrospect, utterly inevitable) finale.

Which opens things up to you, dear reader. Take a historical or contemporary figure, and decide which writer or, even better, which peculiar combination of writers could best have written his or her life. And no conceptual gewgaws this time. As penance for the implication that I'd read a book when I hadn't, the author of the best one will receive a signed copy of my Radiohead book when it comes out.
Posted by Tim F at 9:14 am

Urgh, Crash, I loathed it, (though Empire of the Sun is brilliant.)

Right, off to have a think. I'll be back when I've thought of a historical or contemporary figure.

Surely only a satirist of the order of Swift or Burroughs could have come up with as vainglorious, idiotic and dangerous a figure as George "you're either with me or barbequed in napalm" Bush?

Got it - Cynthia Payne, by Alan Bennett.

Maybe with rude bits by the Marquis de Sade?

I am going to think about this...

I'd like to see Bagpuss done by Sartre. Starts off alone and alienated (cf La Nausée), but through the transformative power of Emily's commitment to a noble cause, learns to 'engage' with society (mice, woodpeckers, etc.) and thus transcend absurdity of existence (cf Les Chemins de la Liberté trilogy).

Anna Nicole Smith by Joan Collins. There's topical for you.

Aren't we ALL getting signed copies of your book then?

John Major could be covered by the Editor of Stanley Gibbons Monthly (The Early Years) then D.H. Lawrence would step in for the Legover Period, to be picked up by Nick Hornby for the guilty post-Edwina self-discovery section.

I'd very much like to read the life story of Judy Finnegan, as filtered by:

Jilly Cooper: for a breathless description of her early rise to success on local news.

Graham Greene: to provide an air of unease around her romance with Richard (according to Wiki, her first words to him were "Hello, I'm your mummy").

Damon Runyon: for a certain ironic detachment regarding the shoplifting scandal, the TV awards bra incident, and the occasional report of shaky hands on air.

Madonna: for a touching closing chapter involving Judy & Richard playing 'Say What You See' on their show, in the style of Madge's children's books.

These are all fab, people. Do keep it up. And Spin, I just checked my contract, and I only get six free copies. I think my mum might be unamused if I distributed the lot to my blogroll. (She's a big Radiohead fan - shuts herself in a darkened room with Kid A and a security blanket for weeks at a time.)

Mine is Robbie Williams, done by the following writers:

First part by Cervantes, his crazy adventures with his rise to fame. Gary Barlow can be Don Quixote. Mark Owen can be the donkey.

Middle part by Thomas Mann. After leaving Take That he goes embarks on an initially rubbish solo career, then releases Angels and becomes a mega star. The path of discovery leads him until Guy Chambers (Castorp's cousin in Magic Mountain) "leaves" him and thus he becomes more media shy, which leads to...

The last part by Albert Camus. This yet to be lived part by Robbie Williams has him questioning the worthlessness of his life so far and sends him into a nihilist black depressions. He shags some nearly nameless birds (who really love him) and befriends wife beaters. A random act of violence (probably with an arab) ensures infamous mug shots and a big court trial. But, in a twist to the original, his past actions do no condem him to death; but in this celeb obessed world we have a suprise ending by...

OJ Simpson. Robbie Williams's trial by media ends with him getting off scott free. He leaves the court room to the sounds of Let Me Entertain You and releases an album call: If I Did Do It, This Is How I Would Have Done It.

Conclusion: written by a million bloggers all debating whether Willams should have gone to jail or been released. A million comment boxes are filled with point and counter point, and they always end up comparing the trial with the Nazis.

Damn beaten to Robbie Williams; I would have had Jean Genet do him.

William Burroughs does the life of George W Bush.

Sylvia Plath does the life of Kurt Cobain

Thomas Pynchon does the life of JD Salinger

Dan Brown does the life of Leonardo Da Vinci (sorry)

you can still do Robbie Williams if you want. Nice to have a comparision....

Jeremy Paxman does Jeffrey Archer with a foreward written by Toyah.