Shooting people for profit and pleasure 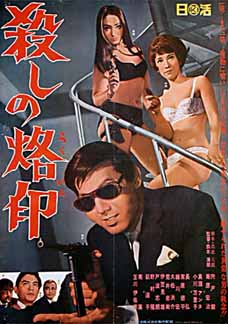 No sooner do I argue that Asians are environmentally hardwired to see the world differently from the way us barbaric gaijin see it, this movie comes along to prove it. Thanks to James Lander, the coolest chemical engineer in the known world, for pointing me to a frenetic yakuza thriller from one of Mr Tarantino’s favourite directors.

The back story goes some way to explaining the end results. Suzuki had got on the tits of his studio, Nikkatsu, by making insanely garish slabs of psycho-Zen weirdness (like Tokyo Drifter) rather than the sushi-cutter shoot-em-ups the Osaka bourgeoisie demanded. So they gave him one last chance; here’s the script, here’s the star, here’s the budget and you’re doing it in mono.

The brilliance is that Suzuki did exactly what he was told. He just took the raw ingredients and gave them a little wasabi on top. The plot is negligible; Hanada, the third-best sniper in Japan (played by fugu-faced Jo Shishido), screws up a hit when a butterfly (lusciously fake) lands on his rifle, and his paymasters turn on him. This leads to a confrontation with the No. 1 killer, with predictably messy results.

So what do we get on top? Well, an anti-hero who can only get the horn when he sniffs freshly cooked rice for a start, after which he pleasures his squealing girlfriend every which way, including halfway up a spiral staircase. Add to the bubbling chanko-nabe: a spot of torture by flamethrower; dead birds as dashboard accessories; diamonds inside glass eyes; execution by faulty plumbing; a strangely homoerotic toilet routine; the coolest Morris Minor stunts you’ve ever experienced; and you’ve got one magnificently strange movie. Too strange, too magnificent for Suzuki’s bosses, who fired him after this final outrage. Oops.

It's all beautifully cool and deadpan, with a central figure who's rather more anti than hero, and a delicious streak of sadism that keeps the viewer from relaxing too much into ironic-chortle mode. It would be pointless to identify the influences at work here, and then to distinguish them from the movies that Branded To Kill has influenced in turn. Let’s just be dogmatically postmodernist and suggest that the only difference between the two groups is an accident of chronology. So sniff the rice long enough and you’ll find befores and afters: A Bout De Souffle; Reservoir Dogs; Point Blank; The Killer; Get Carter; High Noon; Leon; Ashes and Diamonds; The Defiant Ones; Le Samourai; The Passion Of Joan Of Arc; Grosse Pointe Blank; Tampopo (for the food fetishism); and The Prisoner, both for the way key characters are broken down into numerical signifiers, and for the final, doomed, triumphant “I am Number One!”

Expect a bad remake, starring Matt Damon, any day soon.
Posted by Tim Footman at 5:06 am

Another influencee (?) of 'Branded to Kill' is, of course, Jim Jarmusch's 'Ghost Dog' - hope can we forget the Italian getting a bang out of his plumbing whilst hip-hopping to Snoop Dog . . .