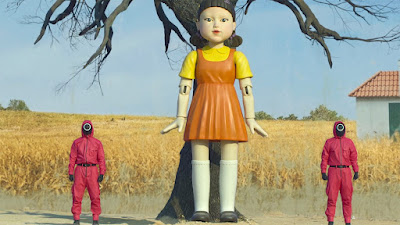 I’m only three episodes into the current Netflix sensation Squid Game and so far I’m not exactly underwhelmed, but the whelm levels are definitely less than I might have expected from the hype. It has elements of things I have enjoyed (the Japanese book and film Battle Royale; the Korean film Parasite; the British TV show The Prisoner) without quite reaching those heights. But I’ll stick it out.

And, while it’s all pretty visceral, I don’t think I’ll be throwing my weight behind Central Bedfordshire Council, which is warning parents not to let their school-age children watch it, because they (the kids, not the parents) are re-enacting the games at the heart of the narrative, replacing the sanction of shooting for the losers which a good old-fashioned beating-up. For a start, it operates on the basis that parents are even capable of preventing their kids from watching telly; moreover, very few of them are watching the show itself, being more likely to watch reenactments of the juicy bits on Tik Tok and similar platforms.

Moreover, in a strange way, what the kids are doing (or are rumoured to be doing) is rather admirable. The producers of the show have appropriated playground games like Grandmother’s Footsteps and imbued them with a glossy, hyperviolent sheen; the kids are just recuperating a chunk of their own culture, and taken it back to its tarmac roots.

That said, I really want the tracksuit.

PS: I’ve now stuck it out to the end. Without prompting too many spoiler klaxons, it’s the marbles episode that takes the show into the realms of greatness; and I’d add Kubrick and maybe Buñuel to the influence list.

Instead of warning kids not to copy Squid Game challenges, how about we warn them not to get into crippling debt?