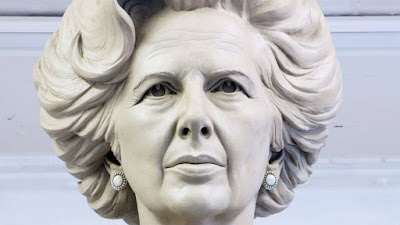 In the Telegraph, of all places, Cal Reveley-Calder deftly sidesteps the controversy over the imminent statue of Margaret Thatcher in Grantham by seizing on its most important aspect; as a piece of art, the statue itself is the worst possible thing, boring. As are most public statues, including that of Edward Colston:

But statues like Jennings’s, so blandly figurative, shove their subjects onto the stage – look, she’s so important that we’ve carved her in stone! – and only permit you a binary view: you are in favour, or you aren’t... That binary, for statues, means “standing” or “coming down”. They last until they don’t, which is fair: “yes or no” is the only art criticism they deign to receive.

And in case you missed it, Colston’s statue has been replaced by something far more appropriate, and more enjoyable and, yes, better.