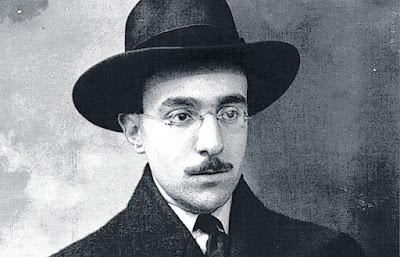 This morning, I was listening to BBC Radio 4’s In Our Time, about the Portuguese writer Fernando Pessoa, of whom I had only the sketchiest knowledge, and within a few minutes I immediately wanted to read everything he’d ever read, all at once, and borrow one of his hats as well. Then I made a fatal mistake – in my enthusiasm, I took to Twitter to alert everyone to the show, a shining example of why the BBC needs to be defended against all comers.

But it didn’t end there of course. While I was in Dorsey’s maw, I noticed that Gavin Williamson had done another very stupid thing, and had my say on that; and then went down another rabbit-hole about Julie Christie’s lipstick in Far From The Madding Crowd. And when I resurfaced, the Pessoa show was still on, but I’d rather lost the thread. So I went back to Twitter to whine about that.

To which one Danny Garlick responded:

Let one of your heteronyms be angry about Williamson instead.

And to be fair, before I started listening, I wouldn’t have got the joke.

And before this post, I wouldn't have got it either.

Pessoa et al are the funniest sad poets who lived in the same body you'll ever read about. I refresh my pessism with a bit of the Book of Disquiet every night. It makes me feel that I am not the most pathetic creature I know after all. I sat in the restaurant he used to get drunk in every night in Lisbon. Felt quite chuffed, although the food was a disappointing, appropriately. Like trying to find Pynchon's bars in Valleta. (They're all boarded up.)