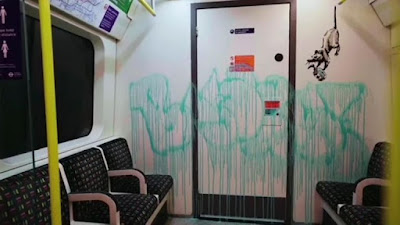 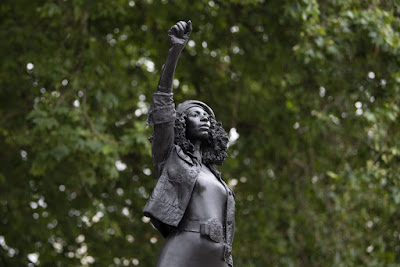 And then, no sooner was the Reid statue up, it was removed again, albeit by direct order of the local council. One could of course argue that the permanence of Banksy’s and Quinn’s pieces is not the point; their surreptitious installations are the real works of art in both cases. And because they are both working in these guerrilla traditions, the worst thing that could happen would be for the graffiti and the statue to be permitted, condoned, recuperated by the authorities. The twin erasures, accidental and then deliberate, represent not the destruction of the art, but its culmination and validation, proving that the graffiti and the statue are both too dangerous to exist.
Posted by Tim F at 9:16 am

Over here they're taking down and then putting up replacement statues of the replacement statues that replaced the statues that were replaced in dizzying succession. My daughter down in N.C says that the only people who seem to be concerned by this are the professional protesters. It's all performance art if you ask me. Of course, you did not, and now look what happened.

No, you're right. The cycles of demolition and replacement are the art. The statues themselves are little more than (to really mash up the metaphors) a blank canvas.