About Walter Benjamin (yet again) 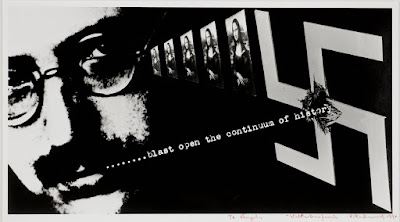 Obviously, it’s easy to trawl through the work of writers from decades past and find that they’ve (presumably accidentally) had the core idea for some phenomenon that only came into being in our own time. Going back over The Work of Art in the Age of Mechanical Reproduction, though, I realise Benjamin leaves the competition standing. Writing in 1936, he comes up with social media...


For centuries a small number of writers were confronted by many thousands of readers. This changed toward the end of the last century. With the increasing extension of the press, which kept placing new political, religious, scientific, professional, and local organs before the readers, an increasing number of readers became writers — at first, occasional ones. It began with the daily press opening to its readers space for “letters to the editor.” And today there is hardly a gainfully employed European who could not, in principle, find an opportunity to publish somewhere or other comments on his work, grievances, documentary reports, or that sort of thing. Thus, the distinction between author and public is about to lose its basic character.

And then reality TV...


In cinematic practice, particularly in Russia, this change-over has partially become established reality. Some of the players whom we meet in Russian films are not actors in our sense but people who portray themselves — and primarily in their own work process.

...in the space of a couple of paragraphs. Nice work, Walt.