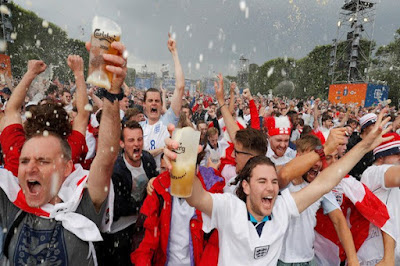 I don’t know if you’d noticed, but there is some football about the place, which is fine; and a hell of a lot of talking and writing and singing about football, very much of which is not. Apart from anything else, I’m getting overwhelmed by overly helpful articles that aim to explain what the world was like in 1990, when England were last in the World Cup semi-finals, especially the fact that the country they played then (West Germany) no longer exists; and the country they play tonight (Croatia) didn’t exist then, nor did the country (Russia) where the match is taking place, at least as independent entities. I just feel old, especially when I remember that 1990 is closer to 1966 than it is to 2018. And don’t get me started on clickbait offering a gloss on what exactly Three Lions means...

England’s (up to this point) successful campaign has also prompted a few Panglossian pieces on how this ramshackle band with roots in Yorkshire and Jamaica, London and Nigeria, Ireland and Portugal, offers a vision of a new, inclusive rainbow patriotism, which is all lovely. But this multiculturalism in motion smudges over the fact that the country is also split along lines of age, class, income and levels of educational attainment. The sense of complicity that we snowflake libtards feel about the twin cataclysms of Brexit and Trump mean that social snobbery, especially when used against white males who don’t shop at Waitrose, is now almost as unacceptable as racism, sexism or homophobia; see how the tide has turned against the “gammon” jibe.

That said, on Saturday, after I’d watched and enjoyed the Sweden match, then made my way across London to a birthday party in (of course) Islington, where architects and psychologists and quite a few people who may not be able to stay around when Brexit finally bites, ate Spanish food and drank French wine. And on the way I encountered plenty of loud, drunk, aggressive, incoherent, beer-spraying, Caucasian men, draped in red-and-white flags, screaming that bloody refrain like a toxic battle cry and doing that weird fistypumpy dance, as if they were pulling on the teats of some enormous, mutant cow, encouraging it to spurt yet more lager into their pink, upturned faces. And three things came to mind; first, that if this is what they’re like when they win, God help us when the bubble finally bursts, whenever that is. (I’m writing this a few hours before the semi-final.) And second, the words of Martin Amis:


At my last football match, I noticed that the fans all had the complexion and body-scent of a cheese-and-onion crisp, and the eyes of pit bulls. But what I felt most conclusively, above and below and on every side, was ugliness — and a love of ugliness.

Which is sneery and snobbish and nasty, but then I didn’t have my taxi or ambulance smashed up, my shop invaded, my police dog hassled for being German. And finally, for some reason, I recalled an interview in the NME with oddball Chelsea/Everton winger and Joy Division fan Pat Nevin, some time back in the 1980s. “What do you love most about football?” he was asked. “Playing football,” he responded. “And what do you hate about it?” “Everything else.” 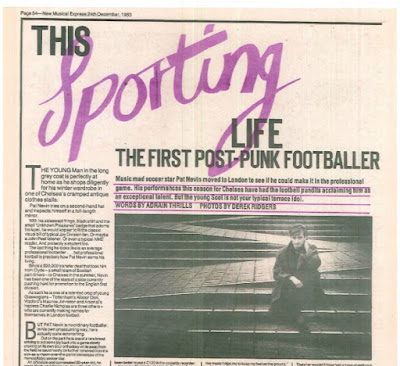