The appetite may sicken 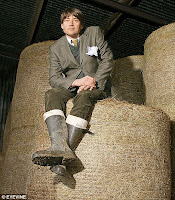 I used to be a music journalist of sorts, and more recently I’ve been a food journalist of similar sorts, and I’m well aware of which one gives me more countercultural brownie points. I still retain enough of a Camden-backroom sneer to have snorted with derision when I saw the advert for Harvest, the latest wheeze dreamed up by bassist-turned-cheesemaker Alex James: it’s described as “the food and music festivals”, which sounds like the ultimate bourgeoisification of rock and roll Avalon: for people who might quite fancy a gentle boogie in the field, provided they won’t get their Boden chinos and Cath Kidston accessories grubby, and that there’ll be something suitable to eat for the kids, because young Hengist’s iridologist has warned us that he might become temporarily bipolar if he goes within 50 yards of non-organic ciabatta, while dear Melpomene is flirting with pesco-fruitarianism.

And then I looked at the line-up and thought, ooh, Hughley Fergley-Wergley, I like him... and Mark Hix, went to one of his places, that was good... Jay Rayner, writes amusingly grumpy reviews... Gennaro... Yotam... this sounds fun... And I thought, God, it’s happened, I really am middle aged.

But, in a move that might have been calculated purely to make me feel a whole lot better, the music line-up appears to be a load of bland, lame, Jools-friendly toss. Food has become the new rock and roll, simply because the rock and roll isn’t rock and roll any more.
Posted by Tim Footman at 9:27 am

In the early nineties you couldn't have ever made up expressions like "bassist-turned-cheesemaker Alex James", even with the aid of halucogenics.

rock n roll should be for the young folks though right? We're probably too old to know where the real rock n roll spirit resides these days.

I wanna teach at the Witchwood School of Rock!

Annie: Apparently it lies with the Two Greedy Italians, which is fine by me.

Geoff: I Googled them, and was prepared to scoff, until I noticed that they organised a T Rex workshop, which is just fabulous. Then I realised that some of the kids attending would have parents who are too young to remember T Rex...