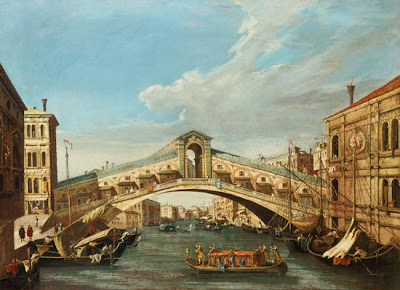 Forgive my lazy ignorance, but I’d always assumed that “Canaletto” was a nickname, based on the fact that he painted lots of pictures of Venice. I’ve only just discovered that it’s simply a diminutive of his real surname, which was Canal. It’s the only case of nominative determinism that I can think of among major painters; unless, of course, someone has evidence that Van Gogh was christened Vincent Sunflower, or that Lucian Freud’s birth certificate identifies his father as Mr Gloomynakedlady.
Posted by Tim Footman at 10:50 am

Thank you. I didn't know that. I doubt whether it will be of any use to me, but it would be churlish not to pass on my appreciation anyway.

Mr Cornetto was a Ventian who made ice cream famous this way too. It's well documented.

Didn't Titian paint pictures of ladies with their clothes off?

You never know when such things might be useful, Vicus.

Charles: always loved the bit in the adverts when the "dee-licious ice cream from Italee" was undercut by a teeny "MADE IN THE UK" caption.

Very good, GSE. I believe he did, the naughty man. Anyone else? Did Poussin ever paint chickens?

I done a lol at GSE.