I wouldn't normally do this kind of thing

Been listening to the Pet Shop Boys' recent Radio 2 show, which opens with 'Left To My Own Devices'; as always, that line, surely their most celebrated, leaps out: "Che Guevara and Debussy to a disco beat". 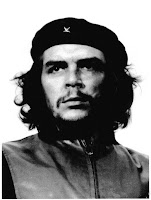 It's memorable, but does it actually mean anything? There's an implication that Neil Tennant is announcing his own aesthetic manifesto, a fusion of politics (Che) and high art (Debussy) in the guise of apparently throwaway pop fluff. Although maybe these are just words that sound good. But if not, why choose these particular indicators? Apart, of course, from the fact that Che and Claude don't look entirely unalike, as can been seen from the attached pics. It's a linguistic formula ("A and B to a C beat") that could incorporate any combination of unlikely bedfellows as 'A' and 'B', where 'C' signifies a specific musical form; although I reckon the word would have to have more than one syllable: "...to a ska beat" sounds oddly abrupt.

• Architecture and pessimism to a rocksteady beat

• Pogle's Wood and Julie Burchill to a foxtrot beat

• Darwinism and mumbling to a trad jazz beat

Some of which sound like the sort of thing that Nietzsche might doodle in the margins while trying to get his head round a difficult Sudoku; or maybe they're just candidates for the space under the blog title.

The only potential downside is that constructions inevitably become clichés: think of "X is the new Y"; or the profoundly tired "M is like N on acid". So we'd better have fun with it before the wheels fall off. Over, as ever, to you.
Posted by Tim F at 6:04 am

Hornby and Barlow on the black pool beat.

Thora Hird and Kylie to a samba beat

Tony Benn and Popeye to a hard house beat.

Charles Manson and Madonna to a Tweepop beat.

i get as far as 'toulouse lautrec' and 'wife in the north' and collapse laughing.

Doctorin' the Tardis to a Glitter Beat.

And I think what it means is - 'Anyone can have a Christmas number one with an Elvis cover, let's try and smuggle in some culture this year.'

This is what happens when I stop blogging for a while. All the best comments get taken.

Antonio Gramsci and John Dowland. To a dubstep beat.

(I thought far too hard about this)

Marx and Engels chill out to that triphop beat while discussing the internal contradictions that will lead to the demise of capitalism and the triumph of the downtrodden lumpen proletariat.

Tennessee Ernie Ford and Ben Volpeliere-Pierrot to a Bernie Clifton dressed up as an ostrich beat.

Gurning and limping to an unsteady beat.

Er, did it have to be people?
*slinks away, shamed*

god and the devil to an atheist beat

Mark E Smith and Bez to a HolsteinSpeed Beat

(And Annie, it doesn't need to be people. Look, Betty picked Ben Volpeliere-Pierrot, and he's just a figment of the collective late-80s imagination. His hat was real, though.)

Hahahahaaa, Ben Volpeliere-Pierrot. I wonder where he is now.

Apparently he's "looking forward to another chart return" in er, 2007.

more gayness in the anus from baldy tim

I tried to incorporate something similar (e.g. "think Conway Twitty having an argument with Ned's Atomic Dustbin about Britney Spears' drum programmer while the Phil Spector wrecking crew play the complete works of Cornelius Cardew on a thimble and rubber band underneath the M25...") as a way of describing what the songs sounded like in an abandoned autobiographical rock and roll novel I was working on sometime ago.

Good job too, by the sounds of it. That I abandoned it, I mean.

Just out of interest, is Ward really a Hardman? Seems it from his queer-baitingly macho comment...

Could have been written with Tim in mind, couldn't it listeners?

I suspect he is quite hard, Bob. You remember what it was like when you got that first glimpse of the support garments section in your mum's Grattan's catalogue?