Someone’s got to do it 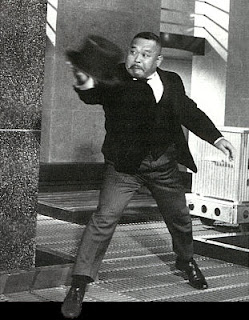 On a recent episode of the weirdly compelling quiz show Pointless, a competing pair delighted the hosts, Alexander Armstrong and Richard Osman, by announcing that they were catastrophe modellers; only to be outdone by the next couple, who make a living by dressing up as zombies. I rather suspect that the next series will feature Professor Kam Wing Chan of the University of Washington, who has apparently “made a career out of correcting people's exaggerated claims about Chinese population statistics”. What’s the oddest job description you’ve had; or that you’ve seen applied to others?
Posted by Tim F at 7:26 am

Tim - you are so sadly out of touch with the UK. No one here has done a useful job these 40 years, except for the odd nurse, and occasional teacher. It is as though the Golgafrincham space ships landed here and took over. Bankers, accountants, marketers are just the tip of the iceberg.

I watched, occasionally. People still describe themselves as Domestic Appliance Technicians, as though they're ashamed of installing washing machines. What's that all about?

The most ridiculous job title I ever heard was: Social Media Methodology and Practice Lead

WTF do these people actually do all day?

My son is the head of the Department of Predictive Analytics (or something like that). MEGO when he talks work.

Who said useful, Vicus? "Telephone sanitizer" would fit the bill.

They lead the practices and methodolise the social media, LC. Don't you know nuffink?

My eyes glaze over when I talk work, e@l. It's a signal to others that they don't need to feign interest on my account.