Been there, done that, bought the t-shirt (and kept it in pristine condition in a vacuum-sealed bag for four decades) 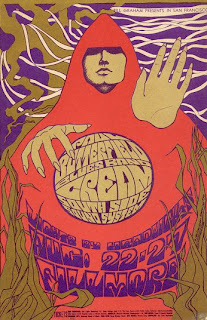 Simon Reynolds, in his excellent tome Retromania, discusses the historicity of rock ephemera, and the fact that psychedelic posters for concerts in San Francisco had become collectors’ items as early as 1968, only a few months after they first appeared. Which is interesting, but surely there’s a difference between trying to keep hold of souvenirs of a scene that’s still vital and happening on your own doorstep; and combing eBay for fragments of mojo from a phenomenon that was dead before your parents met? Or, for that matter, getting your stylist to find an original t-shirt featuring a glam-metal band whose music you’ve never heard? I think I still have a small cache of posters and flyers somewhere from the Exeter club scene of the late 80s; I didn’t think even back then that they were going to set the auction houses alight 25 years hence, but I hoped these two-tone scraps of Xerox and Letraset might remind me of a few good times (alongside the bad and mediocre ones). What the denizens of Haight-Ashbury were doing would become nostalgic/necrophiliac/retromaniac once they’d all sliced off their hair and become brokers; but in 1968 it was no more backward-looking than wearing that Nirvana t-shirt in 1992.
While we’re there, Retromania is the first book I purchased for my newly acquired Kindle; which says something, but I’m not sure what. Will I feel any nostalgic pangs about the grey-on-grey ones and zeroes, the way I might do about my copy of Reynolds’ previous book, the front cover of which was chewed off by a dog? And which will be more valuable on eBay?
Posted by Tim F at 7:36 am

I must read Retromania on 'my' new kindle. Did everyone everywhere get a kindle for Christmas? I guess kindle's have eradicated the need for 1st edition collecting or 'signed by the author'. I see you can buy other people books as presents and send them to their kindles. I'm not sure about that. I like wrapping and nice ribbon and would rather give someone a real book. But yes - I shall investigate Retromania and probably read it on my new kindle.

PS: I am here now: http://rockmother.posterous.com/

It says you've succumbed to hype aimed at people who never really liked books and mostly read utter garbage on a gadget that has no character or aesthetic qualities and is therefore perfect for philistines with no appreciation of either art (design), cultural history, or the tactile sensation that is the book! Traitor.

It could be argued that ebooks make you focus more on the text of a book, so publishers can't buy goodwill with nice paper, care... attention... design. Hmm, I would appear not to believe that very much.

However, Woebot / Matthew Ingram's new 1970s albums book is electronic-only, so it can't be all bad.

Yes, RoMo. Everybody got a new Kindle for Christmas. All 7 billion of us. Except...

El Hombre, and that's why he's bitter (and he also has an anthropomorphic sentimentality about the codex, and as such will probably blub like a girl when he watches this, courtesy of Blackwatertown.)

True, Chris. And I won't stop buying books, any more than I stopped buying vinyl when I got a CD player. (I got a preview of the Woebot tome and got a bit annoyed by the editorial fluffs. Is that harsh?)

Of course you did. New kindle - clearly Retromania had to be the first purchase.

I've got some obscure anti-apartheid posters that may someday grace my walls again.

I'm only at location 391 / 16%, so I wouldn't like to say yet, but I shall keep an eye out for that. Never found him annoying before though, even when he put a TV on his head.

All I want for Christmas is my two front teeth.