Together in electric dreams

Oddly enough, I didn't read much science fiction as a child. I'm sure I looked and dressed as if I did; and plenty of my friends were the sort of high-functioning sociophobes who devoured the oeuvres of Isaac Asimov and Stanislaw Lem and L. Sprague du Camp and Dean Koontz. (Incidentally, I've long believed that all the birth names of actors that are rejected as marquee-inappropriate - names such as Issur Danielovich Demsky and Spangler Arlington Brugh and Herbert Kuchacevich zu Schluderpacheru and Diana Fluck - are redistributed to SF authors whose monickers are deemed to be too ordinary.)

I loved Dr Who, of course, and must have had about 40 of the Target novelisations, but that wasn't *proper* SF, any more than Star Wars was. I think I dabbled with a bit of HG Wells and John Wyndham, and I know I read Fahrenheit 451. But one book that has stuck in my memory is Ben Bova's The Dueling Machine, which I remember borrowing from Leigh Park library at least three times.

So when I picked up a second-hand copy a few weeks ago, it was more than a potential read or even a re-read; it was a matter of revisiting my own younger self. What was it that grabbed my eight-year-old imagination so fiercely?

The eponymous machine is a device that allows people to settle disputes without bloodshed, in a virtual arena; problems arise when combatants actually start dying. The obvious comparison is with the Dr Who story The Deadly Assassin, written by Robert Holmes, which would have been transmitted at around the time I first read Bova's book. Passably interestingly, the conceptual battleground in which the Doctor takes on Chancellor Goth is called The Matrix, and if we leap forwards a further 20-odd years, there are also clear similarities between ideas in Bova's and Holmes's works and the notions that underpin the Wachowski franchise (although that's really only a remake of Tron, but with better clothes and worse acting).

Not only does Bova get his head round the concept of virtual reality over three decades before Second Life, he also second-guesses both how the Web would work, and the uses to which it would be put:

The order was scanned and routed automatically and finally beamed to the Star Watch unit commandant in charge of the area closest to the Acquataine Cluster, on the sixth planet circling the star Perseus Alpha. Here again the order was processed automatically and routed through the local headquarters to the personnel files. The automated files selected three microcard dossiers that matched the requirements of the order...

The personnel officer selected the third man, routed his dossier and Sir Harold's order back into the automatic processing system, and returned to the film of primitive dancing girls that he had been watching before this matter of decision had arrived at his desk...

When I first read The Dueling Machine it was a fantasy; now it seems almost spookily perceptive (although the gender roles underpinning the entirely superfluous love story must have looked pretty outmoded even in 1969) . Back then, I missed his nods to Marshall McLuhan and Vance Packard, which may even have extended to the Situationist appreciation for the subversive power of the decontextualised slogan. The hero and villain are fighting in a TV editing suite, and one of them falls onto a row of switches:

"LOOKING FOR THE IDEAL VACATION PARADISE?" a voice boomed at them. From behind Odal's shoulder a girl in a see-through spacesuit did a free-fall somersault. Hector blinked at her, and Odal looked over his shoulder, momentarily amazed. the voice blared on, "JOIN THE FUN CROWD AT ORBIT HOUSE, ACQUATAINIA'S NEWEST ZERO-GRAVITY RESORT..."

Through his mind flashed another maxim from his old instructor: "Whenever possible, divert your opponent's attention. Create confusion. Feint, maneuver!"

Hector rolled off the desk top and ran along the master control unit, pounding every switch in sight.

"TIRED OF BEING CALLED SHORTY?" A disgruntled young man, standing on tiptoes next to a gorgeous, statuesque redhead, appeared beside Odal...

Of course, it's only when they're out of context that these texts and images make us feel truly uneasy. Under normal circumstances, they're designed to lull us into a dream state, as much a replacement for reality as the dueling machine itself; even if they create insecurity, the solution is inevitably in the next paragraph. And when the prescribed solution to a financial crisis caused by injudicious consumption is for people to go out and buy stuff, sometimes with fatal consequences, you know the slogan-makers have won the war. 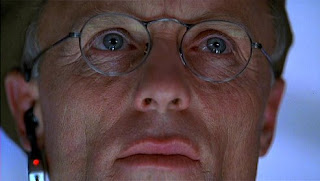 Which is why I find the newest purported mental dysfunction on the block so unconvincing. People afflicted with Truman Show syndrome apparently believe they are unwitting performers in some kind of reality TV show, and their only desire is for some omnipotent director to call "cut!"

But surely that's not a psychiatric disorder. Rather, it's the most sensible coping mechanism for modern existence, and I suspect everyone in the developed world does it to some extent. When I was a child, when I first read The Dueling Machine, I would sometimes create a fantasy life, and believe it to be reality. Now, I tend to look at reality, and wish it were a fantasy.
Posted by Tim F at 7:27 am

Didn't Pete Townshend claim that he predicted the internet?

Everything's going round in circles. Heroes is the Tomorrow People with a budget and Survivors has had a makeover.

Thank God the Sci-fi and fantasy section at Waterstones is still populated with spotty Herberts in Iron Maiden t shirts. They are a reassuring constant in this mad world.

" People afflicted with Truman Show syndrome apparently believe they are unwitting performers in some kind of reality TV show, and their only desire is for some omnipotent director to call "cut!""

Tim, this is in fact a classic description of paranoid schizophrenia.

Well, an OBE for Davies. That's quite a salute to fantasy.

I had exactly the same experience of The Dueling Machine - I read it when I was about twelve, and I can still clearly remember finding it on the book table in our junior school classroom and reading it at my desk. Its images are surprisingly vivid, although I remember different ones - the duel in a room full of traps, and the one in cars on a mountain road. But you're right, the virtual reality content was astonishingly prescient. I'll have to track down a copy and reread it, which with a lot of childhood classics is a deeply postmodern pleasure.

Thank you, Charles. And together we can re-establish the acceptance of "top" as an adjective. Bangin', on one, sorted, etc...

Survivors is better than I dreaded, Garfer, but I still don't hold up much hope for The Prisoner.

Thanks for the tip, Dave. I know what you mean about schizophrenia; maybe TSS is just a variant of it, with people seeing TV cameras rather than surveillance cameras. Incidentally, why do people with delusions always see themselves as celebrities, or heart surgeons, or Napoleon? Has anybody been sectioned for thinking he's something more mundane; a financial advisor, or an ironmonger?

More a salute to getting-families-together-round-the-telly-of-a-Saturday-like-they-did-in-the-1970s, Mrs Peel. It's for services to social cohesion, not to SF.

I had an idea for a book where an ordinary person believes he is an acclaimed but unknown to the general public avant-garde writer.

Each chapter was to be written as a pastiche of a different writer. I was looking forward to the BS Johnson chapter, which would end with "fuck all this lying shit" bringing the book to an abrupt wend.

erm... that should be "abrupt end", obviously.

I've been working on an epigram along the lines of "to say that someting is something or other is like saying that 'The Man Who Sold the World' is Ralph Mace's masterpiece.." (i.e. true - but hardly worth commenting upon...I know, it still needs some polishing up, but like I say, I'm *working* on it...)

To whit: didn't David Bowie predict all this in his epic of dystopian SF in song, "The Saviour Machine"? After the Human League's "The Black Hit of Space" and Where's Captain Kirk?", surely the genre's finest moment...?