Opinions which are of no consequence at all 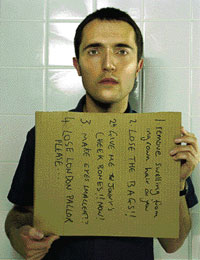 Can I crave your collective indulgence and ask you to assist, albeit passively, with a small experiment? The last time I lowered myself to commercial considerations, and mentioned my new book on this blog, not only did its sales rank on Amazon.co.uk soar to the nausea-inducing heights of 40,000-something, but my Google rating (with quotation marks) rose by 10,000. Both have since slipped to a quite startling degree. I don't know, of course, whether one thing provoked another. So this is just to test whether a simple mention that Welcome to the Machine: OK Computer and the Death of the Classic Album, by Tim Footman, will be published by Chrome Dreams early next month, is enough to set the wheels in motion again.

C'mon, gimme a break. At least my publisher didn't accidentally on purpose leave the manuscript on the platform at Balham Tube station so as to garner a small cough of publicity for a waning career.

Nevertheless, just like the nugatory slivers of news that adorn the advertisements in that free publication that a Slovenian thrusts into your paws when you're trudging to work; or maybe the interview with David Letterman that gives you an excuse to buy Playboy, here are a couple of things that aren't plugs. One is an interesting bit of metablogging from David Cox at CiF (although, as Patroclus rightly insists, CiF isn't a blog).

And the other is from my current bedside read, Sex, Drugs, and Cocoa Puffs, by Chuck Klosterman:

"It's become cool to like Star Wars, which actually means it's totally uncool to like Star Wars. I think you know what I mean by this. There was a time in our very recent history when it was 'interesting' to be a Star Wars fan. It was sort of like admitting that you masturbate twice a day, or that your favorite band was They Might Be Giants. Star Wars was something everyone of a certain age secretly loved but never openly recognized; I don't recall anyone talking about Star Wars in 1990, except for that select class of übergeeks who consciously embraced their sublime nerdiness four years befor the advent of Weezer (you may recall that they were also the first people who told you about the Internet). But that era has passed; suddenly it seems like everyone born between 1963 and 1975 will tell you how mind-bogglingly important the Star wars trilogy was to their youth, and it's slowly become acceptable to make Wookie jokes without the fear of alienation. This is probably Kevin Smith's fault."
Posted by Tim F at 6:33 am

If you can't indulge in a spot of self-promotion, what's the world coming too?
Arf, arf ... do you think poor old Jeanette has been reduced to such tricks? Is the grocery business not panning out then??
Yes, Kevin Smith has a lot to answer for ... and this is not the least of his crimes.

If you send me a copy of the manuscript, I'll leave it at a tube station of your choice.

...oh and Weezer didn't tell me about the internet, Dee-Lite did.

"Because of the phenomenal success of the book, 20th Century Fox was sure that The Other Side of Midnight was going to be a huge hit at the box office. At the same time there were such low expectations surrounding Star Wars (1977) that most theaters refused to book the film. So the distributor at Fox came up with the idea of a package deal: telling theater chains that if they wanted this movie they had to book Star Wars first. This movie went on to become a box office dud while Star Wars went on to become one of the most successful films of all time."

I think all geeky things in general are a bit cool these days. Bjarni said to me excitedly recently, "I don't want to sound too geeky here, but what with the internet and everything it's like that film Revenge of the Nerds has come true!"

And if you can't use your own blonk for self-promotion what can you use?

Hi. Have to admit I did both last time you mentioned The Book. I read most days and enjoy the posts, and the comments, and am looking forward to reading Welcome to the Machine - just realised this sounds uncannily like a teenage fan-letter from my youth (writer, not recipient) - will slowly fade back into the shadows and recommence lurking!

Anthony: Poor Jeanette. One of the great literary fruitloops of our age.

Billy: Suddenly you make me think of a potentially magnificent mash-up...

Annie R: I have a sick desire to see that movie. But I bet it's not as good as Revenge Of The Nerds.

Misty: Please feel free to pipe up more frequently. Everyone's quite friendly, although Anthony does tend to cut up newspapers all day, claiming to be working on The Great Novel, and Billy gets a keep recycling the same old stories about his years on the road with Morrissey.

Incidentally someone recently told me they'd found a copy of my first book in the waiting room of an advice centre. She was apologetic - as though I might feel rejected. I didn't. I was blown away. That might be an indication of how sad/desperate I am - but it led to this woman reading the book, liking it and taking the trouble to let me know.

Watch out for the dangerous Google and Amazon rank obsessions though. That way madness lies ...

Promote away! At least you've got something to promote - some of us haven't, sob.

I've genuinely never watched any of the Star Wars films, and prefer poncey European films that I don't understand, despite being born in 1963. I'm going to have to go away to have a re-think.

You could make the New Book a running theme like the pictures of Andrew (Brillo Pad) Neil in Private Eye:

"Tim, I've heard that it's OK to like Star Wars. I wonder if by any chance you can recommend any new publications with the word 'OK' in the title?".

I mentioned your book on Twitter just completely spontaneously (because I was itching to get it in the mail — I hadn't read this blog entry yet), but I should have given its name. Will do better next time.

I was born in 1965, but the Star Wars movies meant little to me, though I watched them, beyond drooling over Harrison Ford who reminded me vaguely of one of my best friends (over whom I was also drooling).

More of an influence on my youth was Bladerunner, which continues to haunt me.

But that's just me. And I was on the Internet (well Arpanet) in 1982, probably before Weezer was born.

Debi: I once scripted an audio CD about Suede. It ended up in Poundland.

Betty: Write a book about why poncy European films (even if you don't understand them) are better than Star Wars (even if you've never seen it).

Murph: I don't want to leap to any conclusions, but in the last few hours the Amazon.co.uk ranking went from 160,000-odd to 28,130. It's also moving in the right direction on Amazon.com, although it's yet to break a million.

Please expect even more tedious plugs (as Murph suggests, perhaps on the Brillo-in-a-vest model) in the coming weeks. Along with all the usual drivel about Morrissey and Baudrillard and Bangkok taxis.

Valerie: Arpanet. That's so cool. It's like having a waterbed.

No, Valerie, don't get me wrong. I would have loved to be there in the early days, before the www. Did you have any inkling how big this thing might get?

I helped set up an intranet in 1991, and I thought that was pretty impressive. But you're a pioneer.

should we mention it on our blogs?

I enjoyed the first Star Wars film as an impressionable 10 year old, though managed to miss the second and third (or 5th and 6th - whatever)over the following 25 years. I'd internalised the whole good in white Sky(light)walker and bad in black Dar(k)th Vader with the authority of an ancient tribal cultural legend. So, it came as more than quite a shock to be watching The Simpsons in 2002 and hear Homer exiting a cinema and expressing surprise that Darth Vader was Luke's father!!!! What? How can that be?

The worst thing about it was the feeling that everyone else (who'd had any interest in Star Wars, or not) seemed to know and since then I've been wondering what other 'pop-culturally significant' events don't I know?
Still feel traumatised, like finding out that actually all the king's horses and all the king's men did manage to put Humpty together again and he went on to lead a long and very productive life....

Annie: That would be very sweet of you, but don't feel obliged. The same goes for writing glowing reviews on Amazon, and moving copies to more auspicious positions in bookshops.

Misty: I always like the story about Dave "Green Cross Code Man" Prowse, who was offended that he was only the body of Darth Vader, not the voice. "Oi arm yerr farrrtherr, Look!"

I have not liked Star wars for a long time. Since it started in fact. Does this make me ultra cool?