I vow to thee my pasty 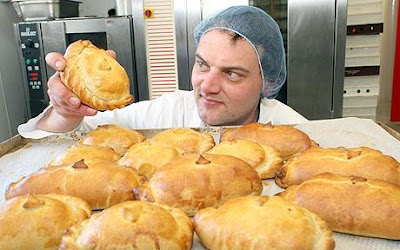 Well, the Olympics has got all some of us feeling terribly British and flaggity-wavery all of a sudden, but one or two people apparently want to widdle on the flame. I’m not just talking about Alex Salmond and his Scolympians (which sounds to me like a species of alien mollusc), but also the head of the tourist body Visit Cornwall, who wants to avoid references to England in any promotional material for the county. Sorry, make that duchy – the word “county” is also verboten. Cornwall is just Cornwall, and that’s where people should go. The fact that they’ll have to go through Devon to get there is but a minor inconvenience.

This does help to remind us that the entity we define as the United Kingdom is a fairly recent invention, and in a political sense only really goes back to 1707, with the Act of Union between England and Scotland. Since then, Ireland has joined the party and then (mostly) left it again, so the current map of the United Kingdom is less than 100 years old; when UKIP’s tosspot-in-chief Nigel Farage dismissed Belgium as “an artificial construction” I wondered why he thinks that couldn’t be applied to the entity he so zealously seeks to release from the bonds of Euroserfdom. Even if we cleave to the notion that England – as distinct from the UK – is a valid concept, we have to accept that for plenty of people a regional or civic loyalty trumps any fealty to nation or country. This is true in Cornwall, Liverpool and also Yorkshire, where they’ve been calculating how many medals they’d have taken if the county had entered the Olympics as a separate entity. I now find that when I’m outside the UK and someone asks where I come from, my immediate response is usually “London”.

I’d guess that every country – barring a few small, relatively homogeneous island or city states – has areas that attract this sort of local loyalty, whether or not they’re actively yearning for independence. National citizenship is simply an administrative necessity, rather than an expression of an emotional bond. I’ve been to New York and Barcelona, for example, but I know damn well that doesn’t mean that I’ve been to the USA or Spain. Are there any real Italians, or are they at heart Venetians and Sicilians and so on? Home is not necessarily where your passport says it is.
Posted by Tim F at 8:03 am

The Olympics hasn't made me more patriotic than I was before, but it has made me far more interested in sport than I've ever been in my life (except for football, which even at Olympic level I still find unwatchable). That said, I do feel a little Yorkshire pride when I see my home county ahead of Australia, Japan et al. in the medals. But races are always more interesting if you've got someone to root for.

Einstien was fundamentally right on both physical and cultural levels. Everyhting is 'relative' to where you are. When I lived in the USA locals could guess I was from the UK and would say things like "I've been there" when asked "where" they'd reply with things like "Rome" because their frame of reference was Europe - my English accent was European. They would ask where I came from and I'd answer by giving them a well known reference point "about 2 hours drive West of London" (Not quite Cornwall)

People tend to forget that'nation ststes' are a fairly recent historical phenomenon and there is nothing inevitable about them. A good bit of Marxist style 'withering away' would do them a power of good. Well maybe not Marxist style but withering away anyway ...

Why is that when the subject of your polite enquiry about geographical origin is of a different flesh tone one automatically feels like a patronising racist?

All true, Tim. As with all ex-pats, my nationalism (which was at one time negligable) has increased with every year and with every medal won at these games, and I now love Her Maj and The Corgis (though not Mr Bean, perversely) more than is conceivably possible. But I live in Transylvania, which had it's boundaries changed dramatically less than 100 years ago and has simmering hatreds that would make a Scotsman blanch. UK seperatists should remember how fortunately they've been - relatively, as Wendy say.

Rol: But even when there's still a vaguely twitching stump of patriotism at work, we still have favourites. I was more excited by, say, Mo Farah's triumphs than by whatever the horsey people were doing. And some of the stories (Oscar Pistorius, the Saudi women, the marathon runner from South Sudan, the US guy in the 4x400 who broke his leg, the Chinese hurdler) were so compelling, Rah-Rah-Team-GB felt pretty irrelevant, frankly.

Hello, Wendy. Yes, London is a special case because it's a global city. If I lived in some other European capital (Stockholm, say, or Bucharest) I probably couldn't hope that people I meet would know immediately what I was talking about. A few years ago I was in Cambodia and met some nice people from Minnesota. They were astounded (flattered?) that I'd even heard of the place; that level of geographical comprehension of another country seemed beyond them.

True, White Rabbit. People do get confused when one explains that Germany and Italy didn't exist as discrete countries 200 years ago.

Richard: I think it can be interpreted as such if the only *difference* is skin colour. If someone evidently doesn't have English as a first language, it's a fair conversational gambit (assuming you'd apply it to Poles and Portuguese as well as Botswanans and Bangladeshis).

Interesting point, Gadjo. Do locals feel more of an identity as Transylvanians than as Romanians/Hungarians? Or have matters got too toxic for that?

Tim, local Romanians do indeed often feel more of an identity as Transylvanians - and it's sometimes hard to judge who they hate more, people from Budapest or people from Bucharest! Local Hungarians, however, are generally still so driven by their sense of injustice that they'd probably agree that even Elizabeth Báthory had some pretty good ideas. Ho hum. At least there's never been a civil war like Serbia/Croatia.