Not raving but frowning 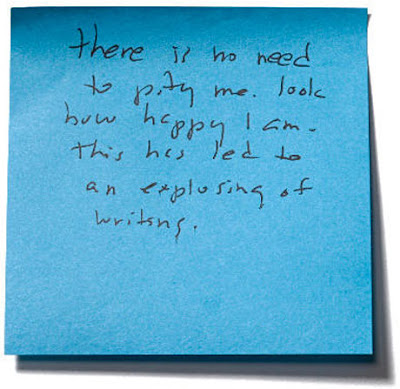 I’ve been reading a piece about the veteran film critic Roger Ebert, who as a result of cancer, or more specifically the attendant surgeries and complications, has had most of his lower jaw removed. Now he can’t eat, drink or speak, which would strike most observers as a horrible state of affairs. But it’s this passage that really struck home:

...because he’s missing sections of his jaw, and because he’s lost some of the engineering behind his face, Ebert can’t really do anything but smile. It really does take more muscles to frown, and he doesn't have those muscles anymore. His eyes will water and his face will go red — but if he opens his mouth, his bottom lip will sink most deeply in the middle, pulled down by the weight of his empty chin, and the corners of his upper lip will stay raised, frozen in place. Even when he’s really angry, his open smile mutes it: The top half of his face won’t match the bottom half, but his smile is what most people will see first, and by instinct they will smile back. The only way Ebert can show someone he’s mad is by writing in all caps on a Post-it note or turning up the volume on his speakers. Anger isn’t as easy for him as it used to be. Now his anger rarely lasts long enough for him to write it down.

This does make Ebert sound a bit like Canio in Pagliacci or, according to one’s inclinations, James Stewart in The Greatest Show On Earth or Marcel Marceau’s The Maskmaker; the clown who needs/is forced to keep a happy face for the world, whatever might be happening inside. And the fact that Ebert’s fans still expect him to make his trademark thumbs-up gesture 2,078 times a day just adds to the impression of compulsory jollity.

I tend to have the opposite problem. Even if I’m in a relatively jolly mood, my default setting is one of moderate disgruntlement. I’m the sort of person to whom perfect strangers feel able to chirrup that indicator of gittishness, “Cheer up, it may never happen.” Which makes me wonder whether there’s an equivalent that can be directed towards the permanently cheerful? Maybe we should just walk up to them, stare directly into those vast, shiny, 24-hour grins and whisper: “You do realise it’s happened?”
Posted by Tim F at 8:17 am

'No mockery in this world ever sounds to me so hollow as that of being told to cultivate happiness.' Charlotte Bronte, 'Villette'.

I once counseled a student who had a physiological problem that caused tears to fall from her eyes whenever she felt any strong emotion. This made her really mad, and getting really mad made her cry. This never had the result she would have liked. She was a tough, feisty, often-angry young woman and she was constantly treated as a weak, wobbly sniffler. She said it made her want to put her fist through a wall.

Which reminds me of the creepy smiling stranger in a bar on Inis Mor off the coast of Galway. It was a friendly place, a big bright room, and interesting sounding conversation all around me. (I could understand the odd word. The word for "and" mainly, which was huge help.) But any time I looked in the direction of the creepy smiling man, there he was, smiling back at me in a creepy way. His grin never wavered. Oddly pink. Not threatening, but slightly eager. It dawned on me eventually that his top lip was missing.

But what did she do when she really wanted to cry, Valerie?