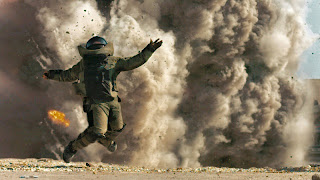 Every year I succumb to the same bout of irrational anxiety at the supreme wrongness of the decisions taken – even the decisions that have yet to be taken – by the Academy, and now is no exception. How could anybody, I rant like a student, watch both Avatar and The Hurt Locker and come out of the experience thinking that Avatar is better? Surely this a distinction that leaps beyond mere opinion, and becomes an objective fact? Informed word (well, what Mark Kermode reckons) is that Cameron's pretty-yet-elephantine parable of ecology and colonialism and stuff is due for the top Oscar, although Kathryn Bigelow will be the first laydee to get the Director gong.

What’s odder still is that the standard medium through which studios plug their products to potential voters is still the DVD, which should in theory put Avatar at a disadvantage. It’s a film that screams for scope and grandeur, which is one of the reasons it left me a bit cold; it’s as if Cameron looked at the technology first, the 3D and the CGI and the IMAX, and then made a film to fit. Anything other than a six-storey screen will diminish its blue-hued grandeur. Whereas The Hurt Locker, although I’m sure there’s plenty of clever technical stuff going on there, benefits from its very modesty. It’s a war film, but a modern one, about bombs and snipers and skirmishes and damaged men, rather than swarms of extras sweeping over the plains.

In fact, only last night I saw The Hurt Locker in its ideal environment; in a crowded minibus, on a dodgy disc picked up for 20 baht (about 40p) on the Thailand-Laos border. The claustrophobia, heat and bumpy roads all added to the deliciously uneasy atmosphere; as did the policeman who flagged us down, told us all to get off the bus, looked grumpy for about five minutes and then let us carry on.

The English subtitles made the whole thing weirder yet. Rather than being transcribed from the original soundtrack (a practice that has its own drawbacks, as one might imagine), these seemed to be the result of transcribing the Thai soundtrack and then feeding the resulting text through some kind of translation engine. And inevitably we couldn’t turn the bloody things off.

Highlights: the protagonist’s name being rendered as “vegetarian food”; all expletives, of which there are many, becoming “mad hey!”; and the regular on-screen reminder of how many days the grunts have left in Iraq (which surely didn’t need to be translated into English text in the first place, since they’re up there in English even in the Thai version) morphing into “intractable fungus budget”.

PS: Ah. Recent events have conspired to make the above post rather redundant. Just ignore me, I would.
Posted by Tim F at 6:33 am

I've seen both films twice now and although I really enjoyed Avatar it has too many flaws to win Best Film.

Hurt Locker also has its flaws, but fewer so is more deserving.

However as much as I liked both, the best film on the nominee list is A Serious Man. But they won't give the Coen Brothers another best film Oscar for a while.

How does the bus ride compare with the one to the Cambodian border? Moguls skiing is a smoother ride...

Well, Titanic won for best picture and that had Billy Zane in a weighty part. Then again, it wasn't exactly Forrest Gump beating the Shawshank Redemption for best picture that year as the competition was pretty lousy. Avatar would be even more disappointing on DVD than Titanic was, so agreed, the Oscar should go to The Hurt Locker (runner-up, Up in the Air).

This 10 nominee business is nonsense. They're just padding the roster. I haven't seen "Precious" "The Blind Side", but I have to disagree with the commenter above and say I would put "A Serious Man" right at the bottom of the barrel of the rest of them. I can't believe the Coen Brothers, responsible for the wonderful "O Brother Where Art Thou", made such a joyless, film that lacked a single likable character. Actually, they were more caricatures, as in the also terrible "Big Lebowski".
Noel

9/10: Oh, Hurt Locker wasn't my favourite either; would have gone for District 9. But I'm not unhappy with how things turned out.

Chrislo: Not that bad, really. More problem with weaving trucks than road surfaces. And of course Vientiane is much closer to the border than PP is.

Caricatures, Noel? As distinct from the finely-honed inventions populating Avatar?

Well, I wasn't comparing it to Avatar, but didn't you see the multiple layers in Giovanni Ribisi's Lex Luthor? I counted at least two.

Genius subtitling. One of them has to be the name of my new company - it's really between "Mad Hey Communications" and "Intractable Fungus Budget Media".

Noel: Ribisi's a Scientologist. Maybe he's had his layers cleaned off by the magic figure of St L Ron.

BWT: There may be copyright issues over 'Intractable Fungus Budget Media'. It sounds like a Napalm Death B-side.