Films I recently watched on a plane

When I started this blog, at a time when most of you were still in nappies, the idea was that I’d use it to write about what I was reading and watching and listening to. After a while, though, I got to the stage when I didn’t have time to write so much; but later still, I realised I wasn’t even making the time to read or watch or listen, so there’d be bugger all to write about anyway.

The only exception comes when I fly, which is the time I set aside to catch up on the films I really ought to have seen over the past few months; and since I’ve been flying more than normal lately, I’ve managed to catch a few films. But I still don’t have much time to write, so please regard these as rough notes rather than full-on reviews. You know, as if you care.

Pride (Matthew Warchus). Similar to Bend it Like Beckham (but with gay people and the miner’s strike instead of feminism, Asian parents and football), this is a movie with its heart in the right place and a script that’s so grindingly banal and obvious it could almost make you vote Tory. It’s not a spoiler alert to reveal that Bill Nighy’s character turns out at the end to be gay, because if you don’t guess that within 30 seconds you’re probably a bit dim. 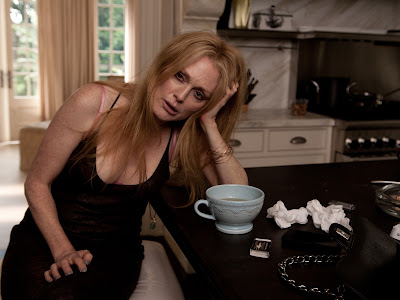 Maps to the Stars (David Cronenberg) Mulholland Dr meets Magnolia, with passing references to The Shining and The Sixth Sense. Cronenberg takes the adage that you shouldn’t work with children and animals to the logical conclusion by trying to kill off all the children and animals. And Julianne Moore farts. I liked it. (By the way, KLM doesn’t censor its on-board entertainment, which in this case means there was a penis. I’m not sure the bloke in the seat next to me was ready for that.)

The Theory of Everything (James Marsh). All competently and sensitively done, but Eddie Redmayne’s turn as Stephen Hawking is the sort of barefaced, cynical, hey-look-at-my-disabled-face Oscar bait I thought we’d thrown out 20 years ago. And I still don’t really understand what a black hole is. 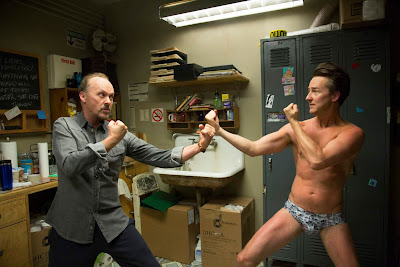 Birdman (Alexander González Iñárritu). Maybe I shouldn’t have been so sneery about Oscar bait, because this actually won the Best Picture gong and it’s utterly brilliant, with Michael Keaton  – as an actor famous for playing a superhero, attempting to resurrect his career – hovering on the crowded intersection between fantasy, madness, performance and the supernatural. But he doesn’t do a disabled face so he didn’t get a prize for himself. The ending actually left me gasping, which can be kind of embarrassing on a plane. Fortunately, this was a different flight, so the bloke who didn’t like the penis in Maps to the Stars wasn’t around to object.

PS: Oh, and in case you missed it, I wrote another thing about food in Bangkok.
Posted by Tim F at 3:10 pm